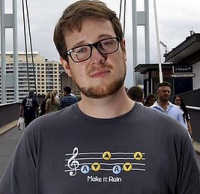 Jackson Palmer is a coder and marketer primarily known as a creator of Dogecoin, a Cryptocurrency. He was one of the big names who joined Steemit in its beggining. His account @ummjackson was created in August 2016, after Steemit made its firsts payouts in July 4th, 2016.

In his Introduceyourself post published in August 14th, 2016 - I put a dog on a coin and the rest is history - hey Steemit! - he finished with a advice to all other steemians: "Steemit is an interesting concept to me as it also embraces the community building approach and some of the content here already looks really interesting! One of Dogecoin's primary use cases was also tipping, which you folks seem to have nicely implemented here. My advice: Use the strength of your community for good, always keep things fun and never let greed become your primary motivator (it can be hard in the world of crypto, I know)".[1]

Jackson Palmer attended the University Of Newcastle from 2006-2008 and studied Bachelor of Management,Marketing.Jackson Palmer was a member of Adobe System's marketing department in Sydney when he was encouraged on Twitter by a student at Front Range Community College to make the idea of Dogecoin a reality. [2]

After receiving several mentions on Twitter, Palmer purchased the domain dogecoin.com and added a splash screen, which featured the coin's logo and scattered Comic Sans text.[3] Billy Markus saw the site linked in an IRC chat room, and started efforts to create the currency after reaching out to Palmer. Markus based Dogecoin on the existing cryptocurrency, Luckycoin, which features a randomized reward that is received for mining a block, although this behavior was later changed to a static block reward in March 2014.In turn, Luckycoin is based on Litecoin, which also uses scrypt technology in its proof-of-work algorithm. The use of scrypt means that miners cannot use SHA-256 bitcoin mining equipment, and that dedicated FPGA and ASIC devices used for mining are complicated to create. Dogecoin was officially launched on December 8, 2013.[4]