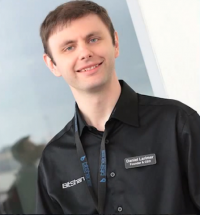 Daniel Larimer was born in Colorado and spent his formative years in Florida and Virginia. He received a Bachelor of Engineering (BE) in Computer Science from Virginia Polytechnic Institute and State University in 2003.[1] He is a visionary software engineer and serial entrepreneur who is focused in the areas of blockchain technology, cryptocurrency, decentralized exchanges, economic systems and freedom.

Dan Larimer is the co-founder of Steemit, Inc and its CTO until march 2017. He's also the CEO of Cryptonomex, Inc. which is a blockchain technology consulting company. He also founded Bitshares and Invictus Innocations. He originated the idea of the "decentralized autonomous company" or DAC. In June 2016 Dan Larimer in his Steemit biog told that over the past three years he have worked with the Bitshares community to implement the worlds first Decentralized Autonomous Organization (DAO) based upon many of the same principles as Ethereum's The DAO. Money was raised, tokens were allocated, and token holders were given the ability to vote on how to spend community money and set blockchain parameters. [2]

Dan's stated mission in life is "to find free market solutions to secure life, liberty, and property for all."[1] Jeff Berwick, founder of The Dollar Vigilante and host of YouTube channel Anarchast heard from Dan that his goal is "engineer the economic incentives which make freedom and non-violence profitable". [3]

Having learned computer programming from his father when still in elementary school, he turned an almost in-born techy/entrepreneurial bent into a business venture fresh out of college, when he joined a handful of buddies to launch a virtual reality company.

In a interview to yBitcoin reproduced in his Bytemaster's Blog "About" section, Dan Larimer said: “We did well and made money every year, but we closed it down after five years and went on to other things,” he says. Some of those involved him writing code for unmanned ground and air vehicles, a field he later left when its military implications left him a touch uneasy.[1]

Standing for Ron Paul and talks with Satoshi Nakamoto

The yBitcoin article said that all the while, Dan Larimer was pursuing nothing less than what he unabashedly calls “the pursuit of truth about everything - I’ve always wanted to know what’s going on in the world and how things work.” Encounters with the Ron Paul presidential campaigns stimulated an intellectual odyssey into the depths of libertarianism, a passion that informs his unique fusion of economics, innovation, politics and the common good.

"I believe whole-heartedly in voluntary associations and moving beyond a contract society where I’m going to get you to do X, Y or Z or I’ll get the government to point a gun at you,” he says. “Contracts always come down to government force. All that just drives costs and misery up. I want to do business on a handshake and make reputation primary, because if your reputation is damaged it’s the worst thing that can happen, and your business suffers. It’s never about coercion, but about the Golden Rule with a slight twist: ‘Don’t do unto others as you don’t want them to do unto you.’”

Dan points out that Bitcoin operates on basically the same premise, where, he says, “No one delivers anything by fiat.”

True to the Internet age, he discovered Bitcoin when pondering the intellectual knots attendant to decentralization of the financial sector. So he Googled “decentral- ized currency,” and up popped the name “Satoshi Nakamoto,” the pseudonym for the developer of Bitcoin, whom he soon began regularly communicating with before developing his own twist on Nakamoto’s blockchain technology in the form of BitShares.[1]

The creation of BitShares

In 2009 he was attempting to engineer a digital currency when he discovered Bitcoin. He immediately got involved with Bitcoin and began communicating with Bitcoin creator, Satoshi Nakamoto in a Bitcoin forum. At this time he was alarmed by the amount of centralized exchanges being arbitrarily shut down. He came to the conclusion that decentralized exchanges would become necessary. It was at this time he created BitShares and invented BitUSD which is the first trustless cryptocurrency pegged to the dollar.

In a interview to yBitcoin reproduced in his Bytemaster's Blog "About" section, Dan Larimer said: “I was trying to figure out how to create a decentralized bank,” so I had an idea and put out a bounty on the Internet, for which I’d pay $1,000 to anyone who could convince me not to put my life savings into it. No one really could, but I paid it anyway, because there had been a lot of good questions raised. Then a few days later, I solved why my idea wouldn’t work! I was really sad, but then on June 2, 2013 -I remember the day- it came to me. I discovered the key that led to one of the BitShares businesses we’re building called BitShares -a decentralized exchange that combines the benefits of Bitcoin with the price stability of the dollar. That has continued to lead to more exciting uses of our technology.“

The same concept was applied to Steem Dollar (SBD). For over two years he innovated and fine-tuned blockchain technology to support a decentralized exchange. The resulting technology is called Graphene and is what powers Bitshares and Steem.

The creation of Steem

If Bitshares was created to solve the issue of decentralized exchanges, Steem and Steemit are based on a combination of social networking and few concepts of mutual aid society. Before creating the Steemit, Dan mentioned the concept of a 'social network of mutual aid societies' as MUXER in his blog Mutual Aid Society (published in December 31st, 2015).[4]

In March, 15, 2017, Dan resigned Steemit, Inc with a post - Today I submitted my Resignation to Steemit, inc - published in his Steemit account.[5]

The creation of EOS

Dan Larimer is currently the CTO of EOS, the blockchain operating system for commercial scale decentralized applications. It promises to have the capability to process millions of transactions per second through horizontal scaling. It has it's own constitution, the first of any Blockchain.

In January 4th, 2015, Dan wrote a blog post explaining his position about economy theories: Why I am an Austrian Economist - Take 1. The blog and principles of Austrian economic were criticized by many, along with Vitalik Buterin, one of the Ethereum's founders. Vitalik responded with a paper wrote by Bryan Caplan of George Mason university titled “Why I am not an Austrian Economist”. Caplan began as an Austrain economist and then switched after 8 years and a Ph.D in economics from Princeton.[6]

Dan presented a sound argument in favour of Austrian economics, he wrote: "I am a very principled individual and am not easily impressed with fancy math. I like the Austrian approach to economics because it is an approach based upon principles and deductive/inductive reasoning." After two days, due to solid critique from Bitshares Talk forum folks he wrote another post ‘Why I am an Austrian Economist’. There he reinforced: "I am an Austrian economist because it is the only theory of economics that is compatible with my mission to find free market solutions to secure the life, liberty, and property of all."[7]

In July 3rd, 2017, the steemian Mohit S. (@mohit18jan), after reading a lot of articles on Dan's blog to understand his personality and to have a glimpse in to his world, confessed being infected by the cult of Dan Larimer and defined him as a perfect mix of an economist and a programmer.[8]

In March 15, 2017 the steemian @demotruk proposed a Petition to Demand Steem be made fully Open Source.[9] In that month, in the same day of his resignation as Steemit, Inc Chief Technology Officer, Dan Larimer published the post - Making Steem really open source (deleted - see comments)[10] - where he mentioned the Against Intellectual Monopoly study pulished in 2007 by Michele Boldrin and David K. Levine which statement says: “In fact intellectual property is not like ordinary property at all, but constitutes a government grant of a costly and dangerous private monopoly over ideas. We show through theory and example that intellectual monopoly is not necessary for innovation and as a practical matter is damaging to growth, prosperity and liberty”.[11] Few months later, in May 19, other steemian Aggroed published an amazed post celebrating that Steemit, Inc adopted the MIT copyright license like Bitcoin.[12]